Passage to Djibouti and Djibouti

When we left Cochin, India for Djibouti, we had to cross the Arabian Sea and sail through the Gulf of Aden. The western Arabian Sea and the Gulf of Aden are notorious for pirates who prey on yachts. For protection, the rally boats broke into three groups, slowest, medium and fastest, and each group went through as a convoy. As boats came from different ports (India or Maldives), we met at a rendezvous point about 200 nautical miles east of the entrance to the Gulf of Aden. From there to Djibouti, we sailed in formation for mutual protection - the convoy presented a "hard" target to potential pirates. We also had daily position reports which were passed to the French navy in Djibouti, but we never expected outside help in the event of a pirate attack.

The passage to Djibouti was billed as a simple one, with reliable NE breezes of ten to fifteen knots. Of course, things do not always come out as predicted. 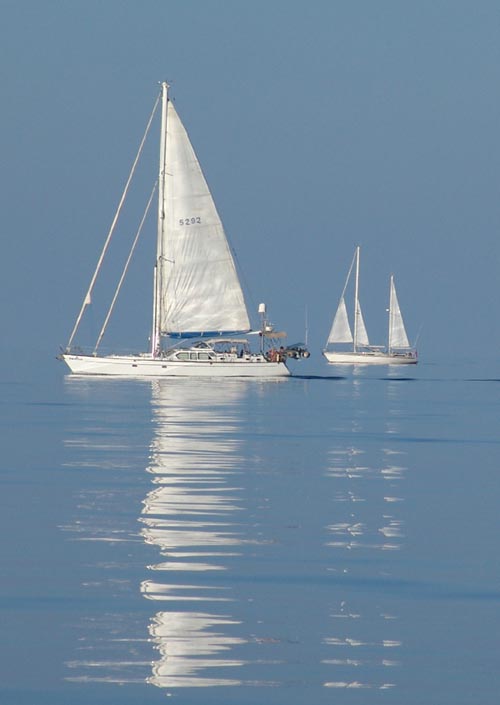 How Calm Was It?

This shot of PAROO and DOCTOR BIRD in convoy positions give you the hint. We are in a dangerous part of the Arabian Sea ("Pirate Alley"), and wanted to spend the least amount of time there. With no wind, the real problem is - how much fuel do you have onboard?

We started this long leg with five day's worth of fuel for a fourteen day trip ... more than enough considering the prediction of good winds. But, we had used more than half of that before we even got to the rendezvous point.

PAROO was nice enough to give us fifty gallons. REGARDLESS and DOCTOR BIRD each gave us ten more gallons, but it looked like we still could only power at night, and had to sail during the day.

It was getting tense out there, with boats nervous about pirates, and with some of our convoy having enough fuel to motor to Djibouti, and others of us not having enough.

Leslie started calling passing ships (we were on the track of many who had passed through the Suez Canal) to see if they might kick a 55 gallon drum of diesel fuel overboard. John on REGARDLESS took up the task too, and finally, after four days, our tensions were lifted, and tempers came down.

The small tanker PEGASUS came to our rescue!

This shot by Sue Arnold on PAROO show how the other five boats in our convoy homed in on PEGASUS like hungry piglets around a sow! It felt about the same too!

The captain, "Captain Paul", is a small boat sailor in his native Denmark, and knew how we felt. He maneuvered his boat so everyone could come alongside safely. By having the ship in slow reverse after each boat caught their lines, we could put our helm over and stay off his side. While it looks very calm, the sea always has some swell, but we did not hit his side with our hull or spreaders.

In the old days, sailors always helped others in need. Captain Paul acted in the best traditons of the sea. Thank You Paul! 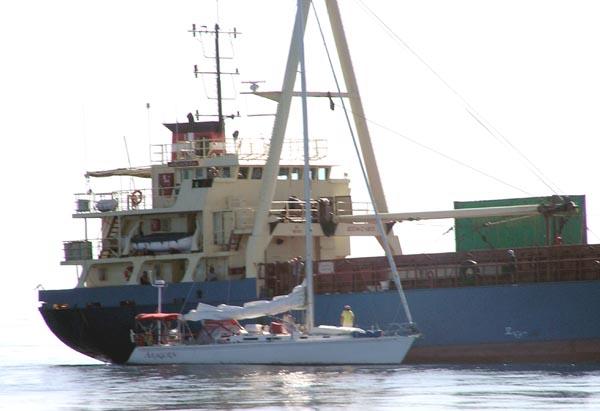 When it was ARAGORN's turn, we were treated (like all the other rally boats) to a bucket full of ice and a cold Carlsberg beer for each crewmember. They also offered cigarettes and other goodies. Leslie, a non-drinker, asked if they had any ice cream, and we were presented with a brick about the size of two quarts. After dinner that night, we dug out the chocolate sauce and feasted ... the ice cream went down in about 1.5 minutes! We filled our tanks and many jerry jugs too (see below).

In return, in addition to paying for the fuel, we dug out three bottles of good dark rum for their crew's mess, and a bottle of Remy for Captain Paul.

The boats in Group I (slowest boat convoy) also were very low on fuel, despite some given to them when the fastest convoy sailed by them. As they were about fifty miles ahead, we met up with them and passed over the jerry jugs while doing a moving raft-up maneuver soon after dawn. 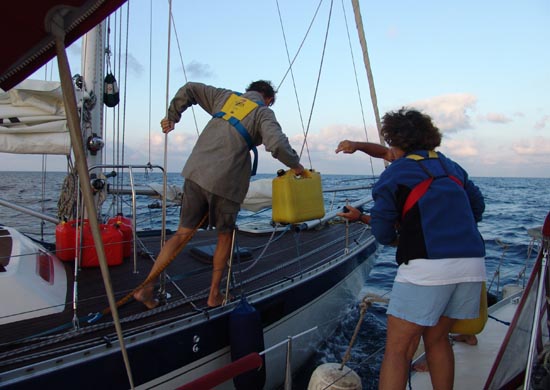 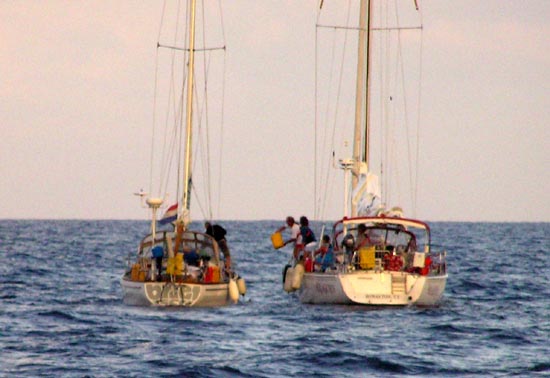 Sue Arnold on Paroo shot this when we passed six jugs to BRIET.

During the light air, Ginny got to learn how to set, douse and trim a cruising 'chute (aka: gennaker, asymmetric spinnaker). Here she is hand trimming on her first watch on the sheet. 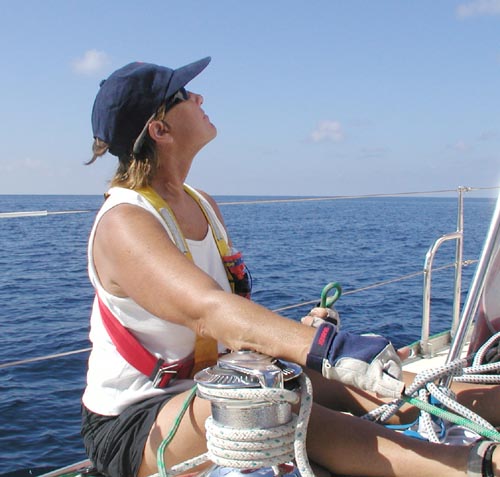 Not a lot of wind, but ARAGORN is a flyer, especially on a reach. We did about seven knots in less than ten knots true, in cruising trim! Unfortunately we outstripped the others in the convoy then, and had to douse the sail before dinner.

Djibouti - A City and A Country

Finally, on 13 February, we made it into Djibouti. There is not much there, except for a port, mostly active for shipments into other parts of NE Africa, and a French Naval Base. 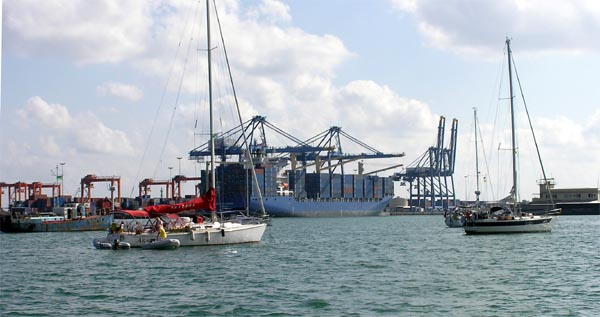 Sue Arnold took this nice photo of us on the hook in Djibouti. 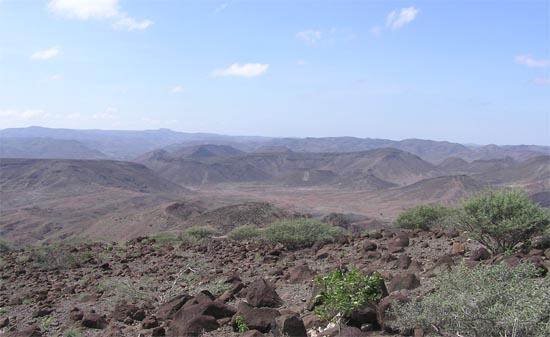 And this one too, of the mountainous desert, which is most of the country of Djibouti. 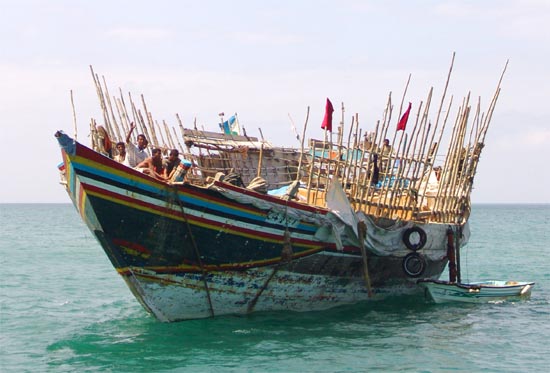 In keeping with our other photos of native craft, this is a typical trading Dhow (powered version) anchored in Djibouti. These boats come from Yemen, Sudan, Somailia and other neighboring countries, load full of cargo (by hand) and chug their way off. The crews were very friendly (see man waving from bow), and played local music at full blast during the day. The "sticks" on the side are to hang tarps up to keep spray and slop from ruining the cargo. They are very labor-intensive. 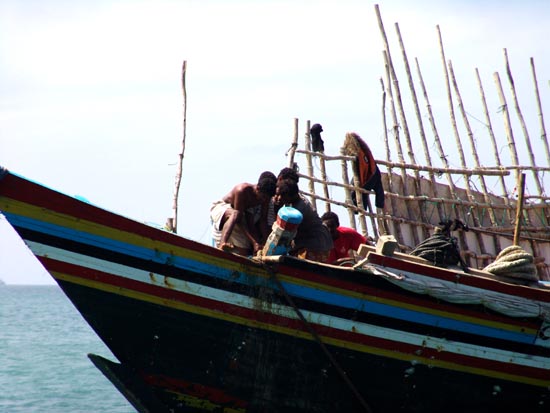 The anchor windlass is strictly hand-powered... but with four or more man-power. 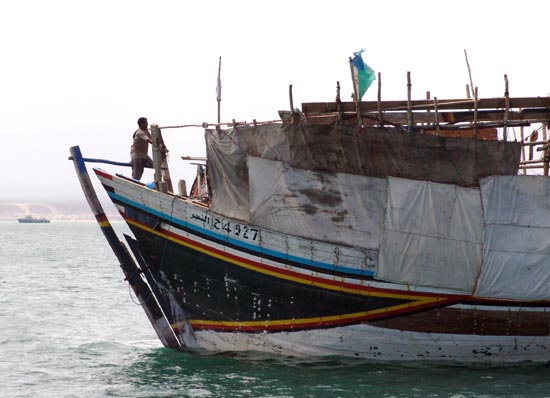 And the helmsman works a rudder that may have been designed a millenium ago.