This section covers Kumai (a highlight!) and Serutu in the west of Indonesia. Kumai is a true jungle town, with shades of Lord Jim. It is also the home of the orangutan rehabilitation center, where orangutans are reintroduced into the wild after being orphaned or put out of their homes in Java or Sumatra. We stopped at Serutu underway to Nongsa Point, a resort and marina just across the straits from Singapore, and our last port in Indonesia. Please see our introduction in Indonesia-Eastern Part too. 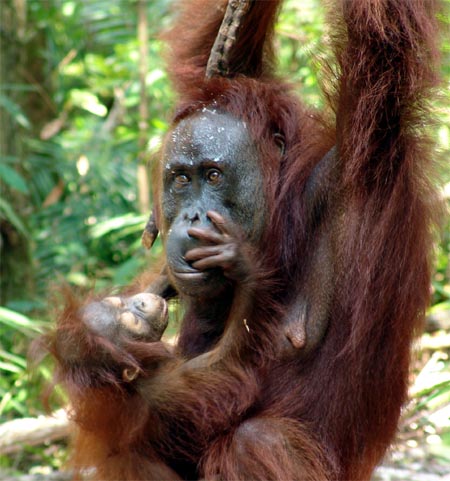 Orangutans are still an endangered species, despite being so cute.

Really, they are cute, and have many almost-human behaviors, that is why their name means "men of the woods". We got to see them close up at the Orangutan Rehabilitation Center near Kumai on Kalimantan (used to be Borneo). To get there, we sailed across the Java Sea NW from Bali, and then up the Kumai River, anchoring off the town. Along with ARAGORN were NADEMIA, ELISE and BARBAS. From the town, we had to take riverboats up the shallow rivers and creeks to the Center. There we were able to watch and participate in the feeding program, where semi-wild Orangs come to platforms in the jungle to eat. 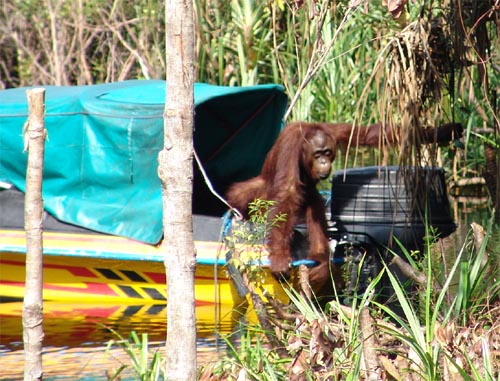 Our first introduction to the orangutans was at the pier where we tied up our riverboat. Just upstream was a small speedboat, with an orangutan aboard who had untied the boat. He had obviously seen humans driving the boats, as he would go aft to the engine, maybe paddle the boat, but then run forward to the wheel, which he would try to steer. He could not quite figure out how to make the boat move under power, but he was trying hard. I believe if we had taught him how to turn it on, he could have taken it for a spin! 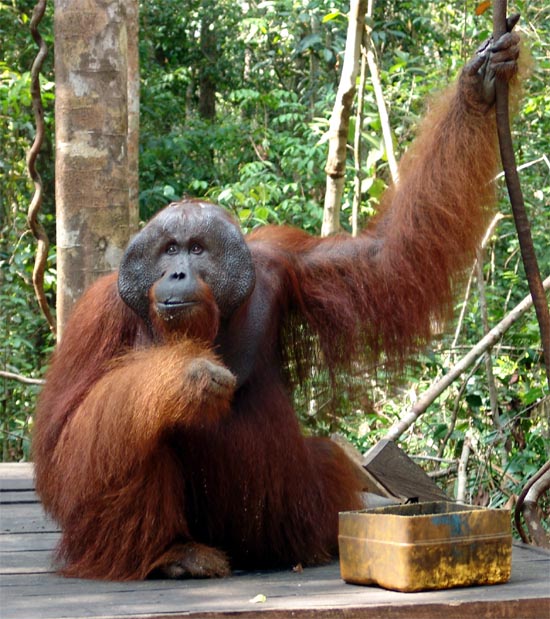 When this big male came to the feeding platform, all the other males split. The females stuck around, staying near the big man. He probably was over five feet tall, with an extraordinary reach, and so powerful. He was constantly on alert, and seemed that he would not tolerate any flack. 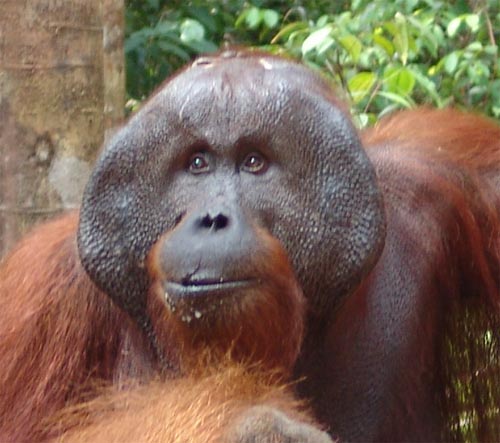 But the face showed curiosity and intelligence.

Dick got to feed this one. 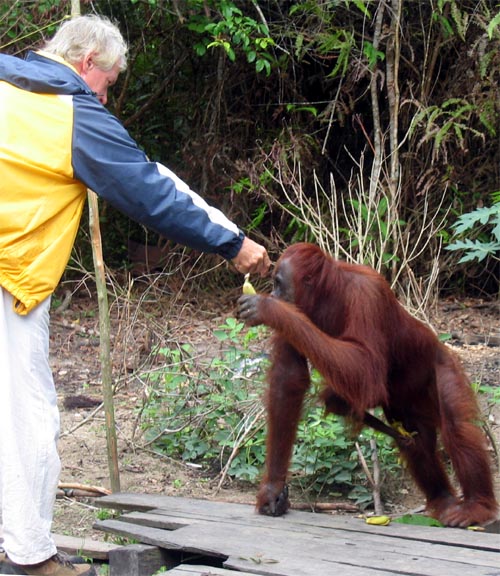 What it all really comes down to is: how do you want to hang out? 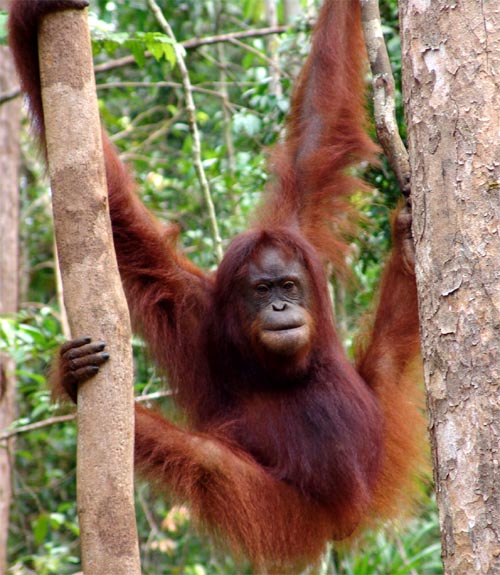 Check out that reach (seven feet).

The part of Kalimantan where we were is low-lying and frequently swampy. While there are farms, there are few roads. Transportation is by water, and ranges from small canoes up to large tugs pulling barges full of felled trees of the 6 to 8 foot diameter range. Kumai is the major town in the area, and supplies many of the local people with equipment and gear as well as food. 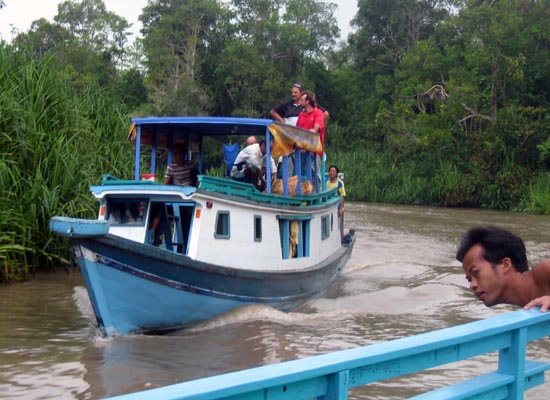 This was our river transportation. These two-decked boats have a one-lung, large displacement diesel that is hand started. The boat trying to pass ours has the crews of ELISE and BARBAS aboard. The cook for both boats is looking over the side. 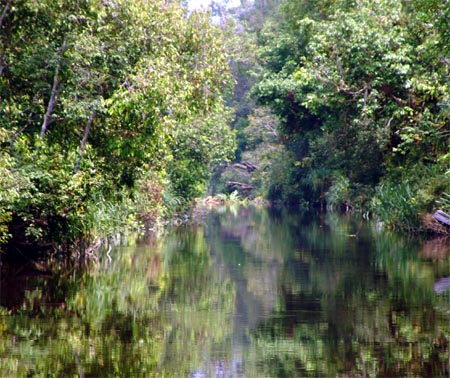 This was the typical scene of the upper river ... narrow and with overhanging jungle. Everything in the jungle would come to the river almost daily to find water, probiscus monkeys, orangutans, and ...

The freshwater crocs would lay in wait. 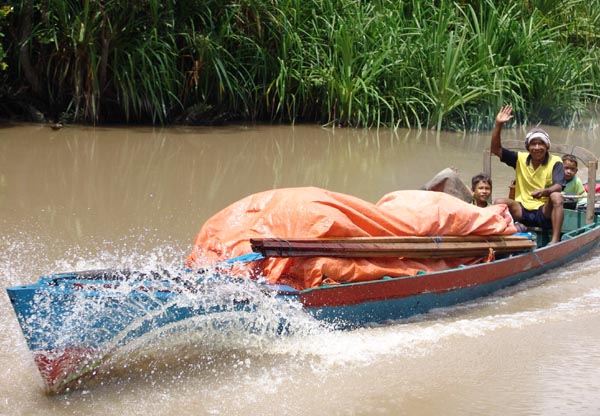 There was some higher-speed transportation: dugout canoes with larger-horsepower outboards. This family had the right transportation for their goods. 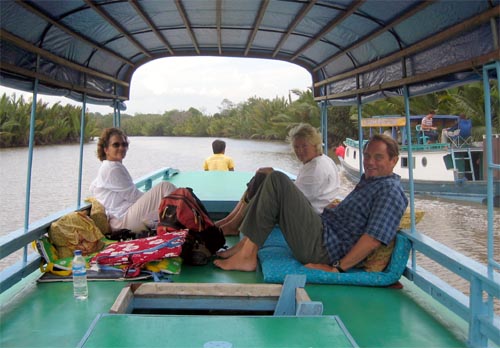 On the lazy river... Leslie, Carolyn and Alistair on our boat. 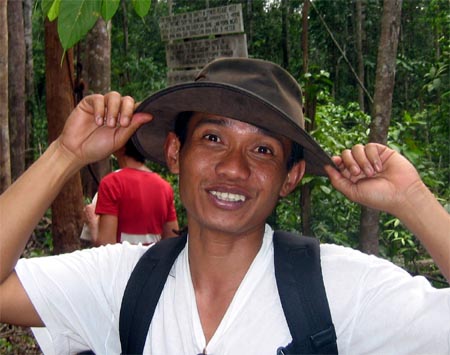 Also in attendance was our guide, Gilang Albanjari, who is showing off in Dick's Australian hat. If you ever get to Kumai or Lombok, you should hire Gilang. Write me for contact details. 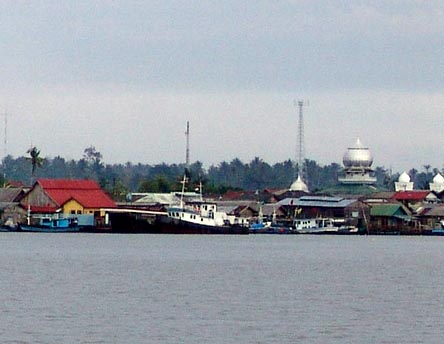 A few scenes of the riverfront at Kumai.
The large tug, the cell phone tower, and the mosque dominate the poorer aspects of the town.

And notice the influence of 16th century European ship design on these local freighters. Can you see the rudderboards on the starboard side of the white vessel? 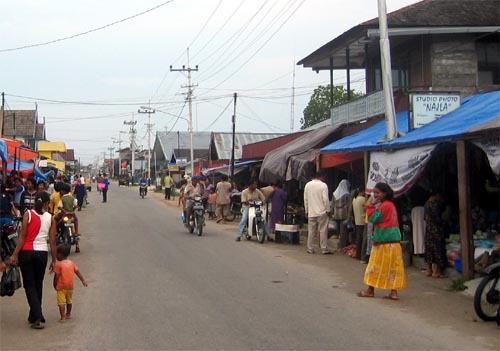 In the town of Kumai, the market was doing a good business, despite it being a Muslim town during Ramadan. Everyone was buying for the meal just after sunset. Our guides would look forward to the first sip of water and the quick snack once the sun goes down, then the big meal. 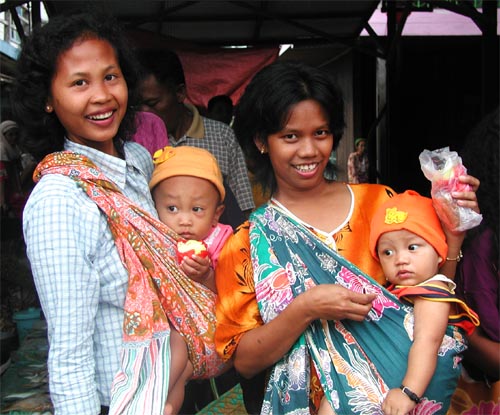 Indonesians of all ages love to smile and be photographed. Here two mothers with similarly dressed newborns catch us in the market to be photgraphed. 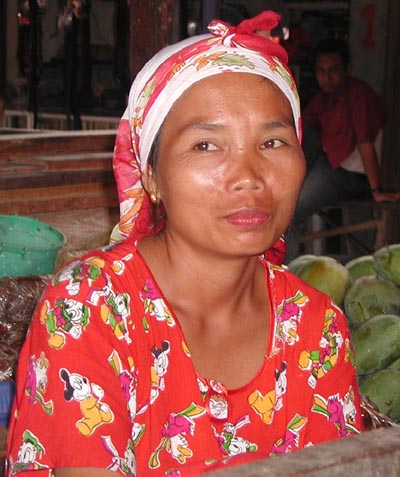 And this woman wanted her photo taken in her Mickey Mouse blouse (really pajamas?)

We visited the island of Serutu as a break between Kumai and Nongsa Point, the last stop in Indonesia. In addition, a boat from the last Blue Water Rally wanted us to drop off a photo album they had made of their stop in Serutu two years before. Serutu may be one of the poorest islands we have ever visited. Despite being part of a country with modern parts, the people of Serutu eke out a living by fishing and then drying the fish. While they have some diesel-powered boats, most of their life revolves around drying fish on racks. They have built a mosque, but we could find no priest, and their water comes from a shallow well. 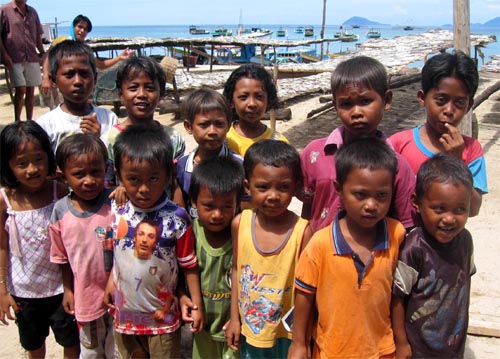 Some of the many children of Serutu, who mobbed us (we loved it) when we came ashore. Not fish drying racks behind, and their small fishing fleet. 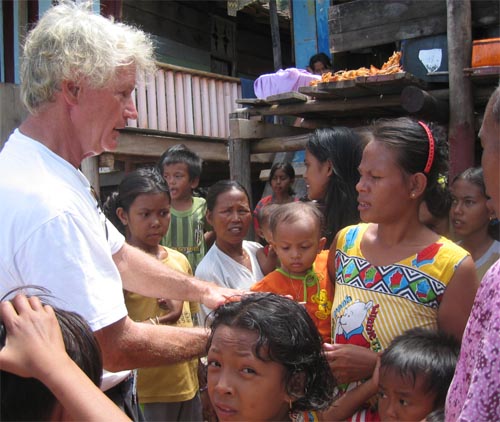 After trying to communicate what the photo album was all about, we found the older sister in the family featured in the photo album. Dick presents it to her for safekeeping. 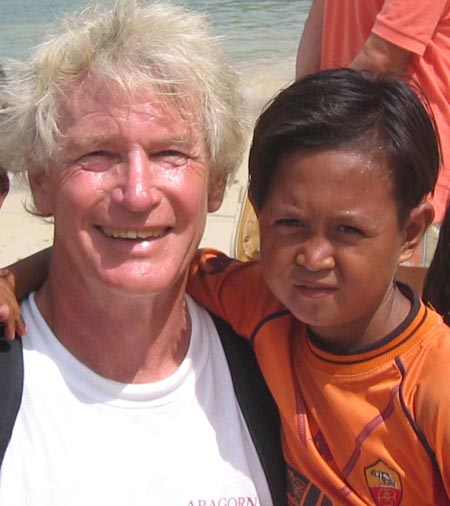 Dick was fortunate to have made a friend on Serutu.

As we said in our introduction to Indonesia, it is a big country, and we put in lots of miles crossing it. "Sailing" is a loose term for a country that is located so near the equator, and the Intertropical Convergence Zone (read calms). 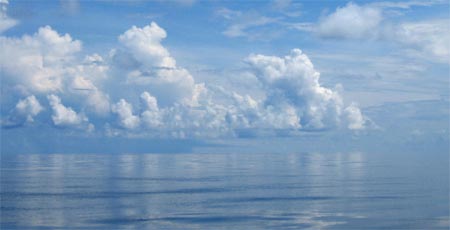 This was the kind of conditions we had ... two or three knots from well aft the beam. As a consequence, we thought we would use all our diesel fuel getting to Nongsa Point. 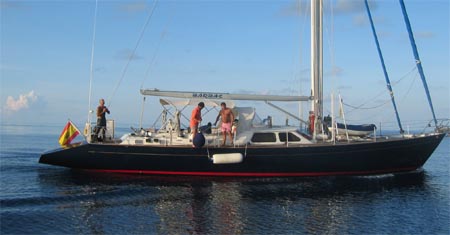 Alberto, Luis, Manuel and a friend aboard the Spanish rally boat BARBAS rigged up for a running raft in the calm conditions to pass three jugs (=15 gal) diesel fuel to us underway. We passed back medicine for one of their crew and some red wine they were low on (horrors on a Spanish boat). One of the big benefits of our rally is the friends we have helping out all the time.